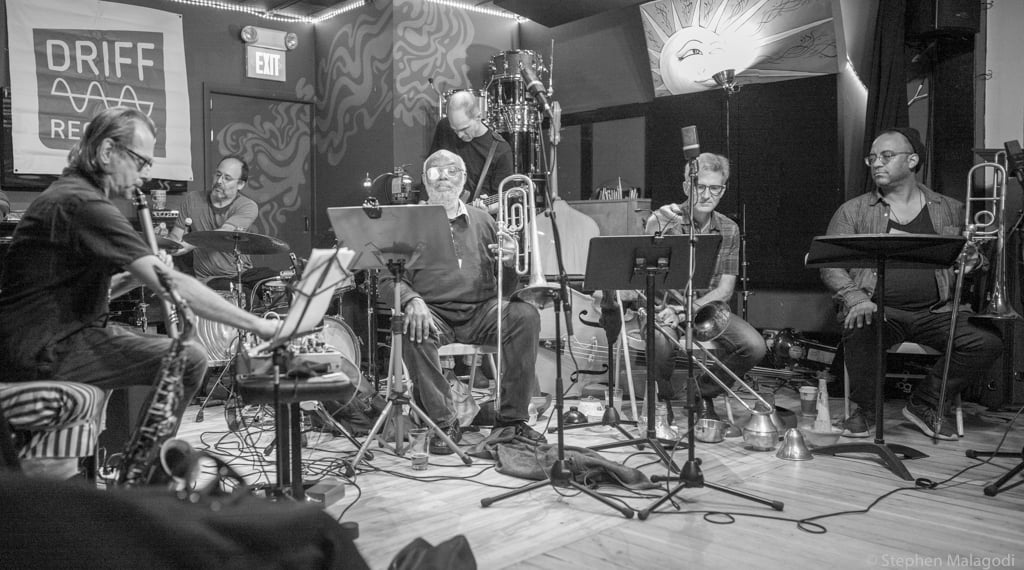 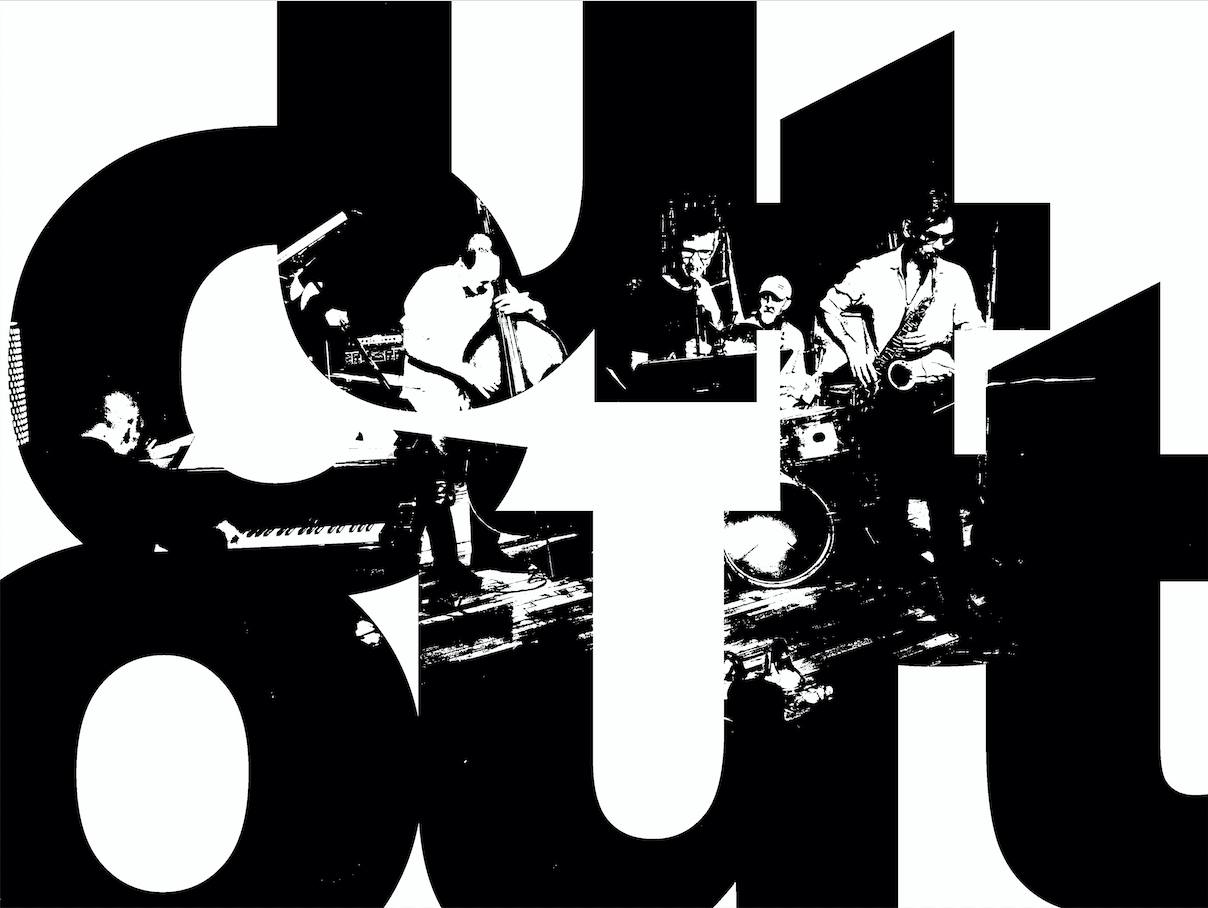 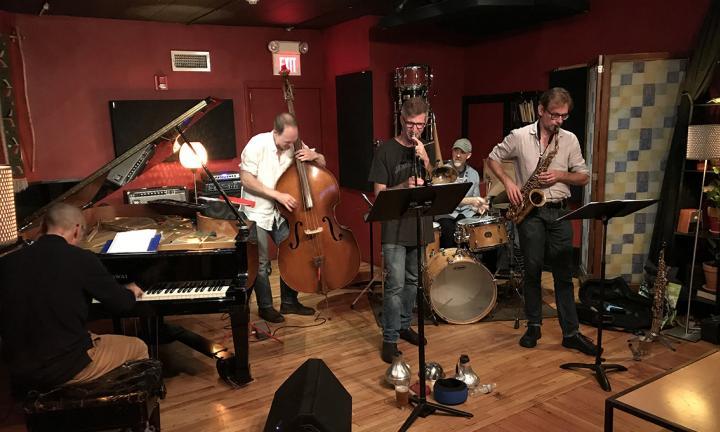 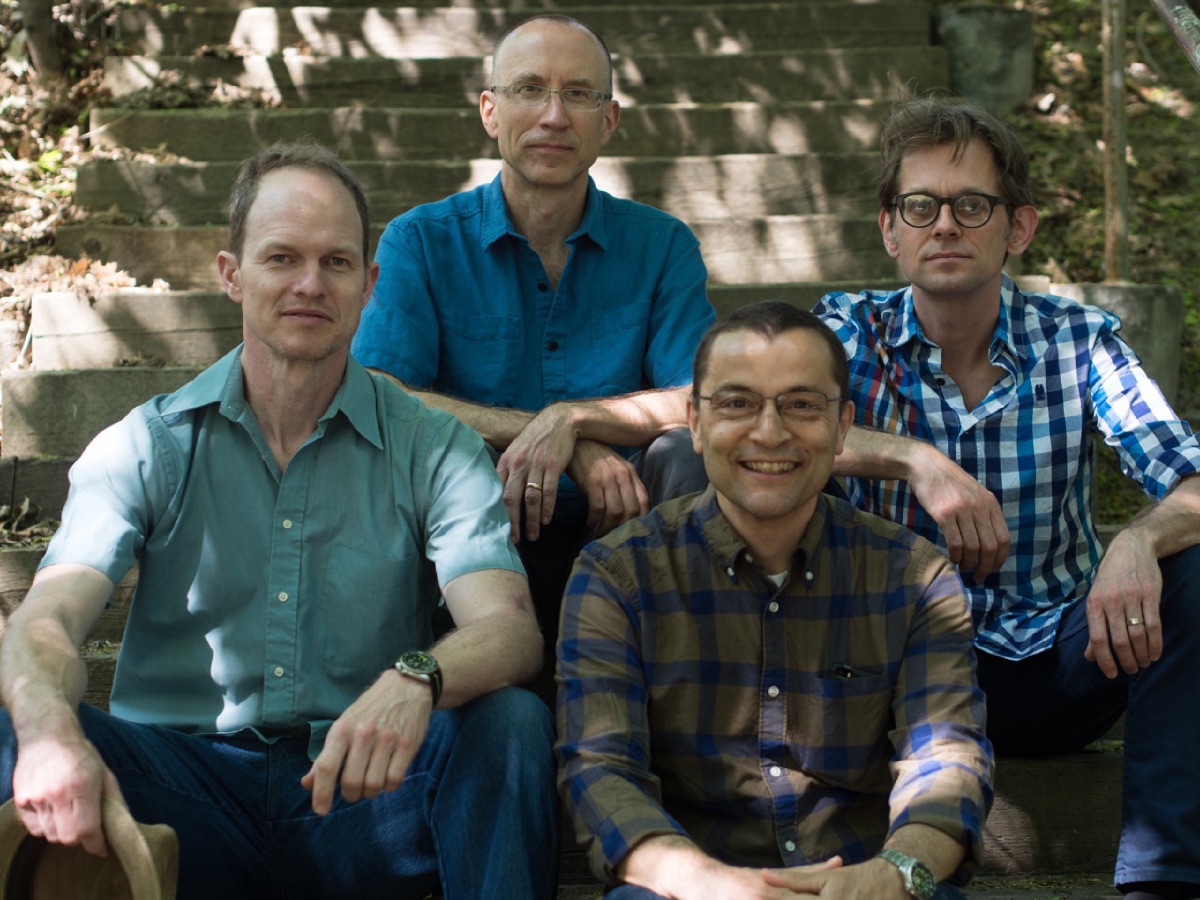 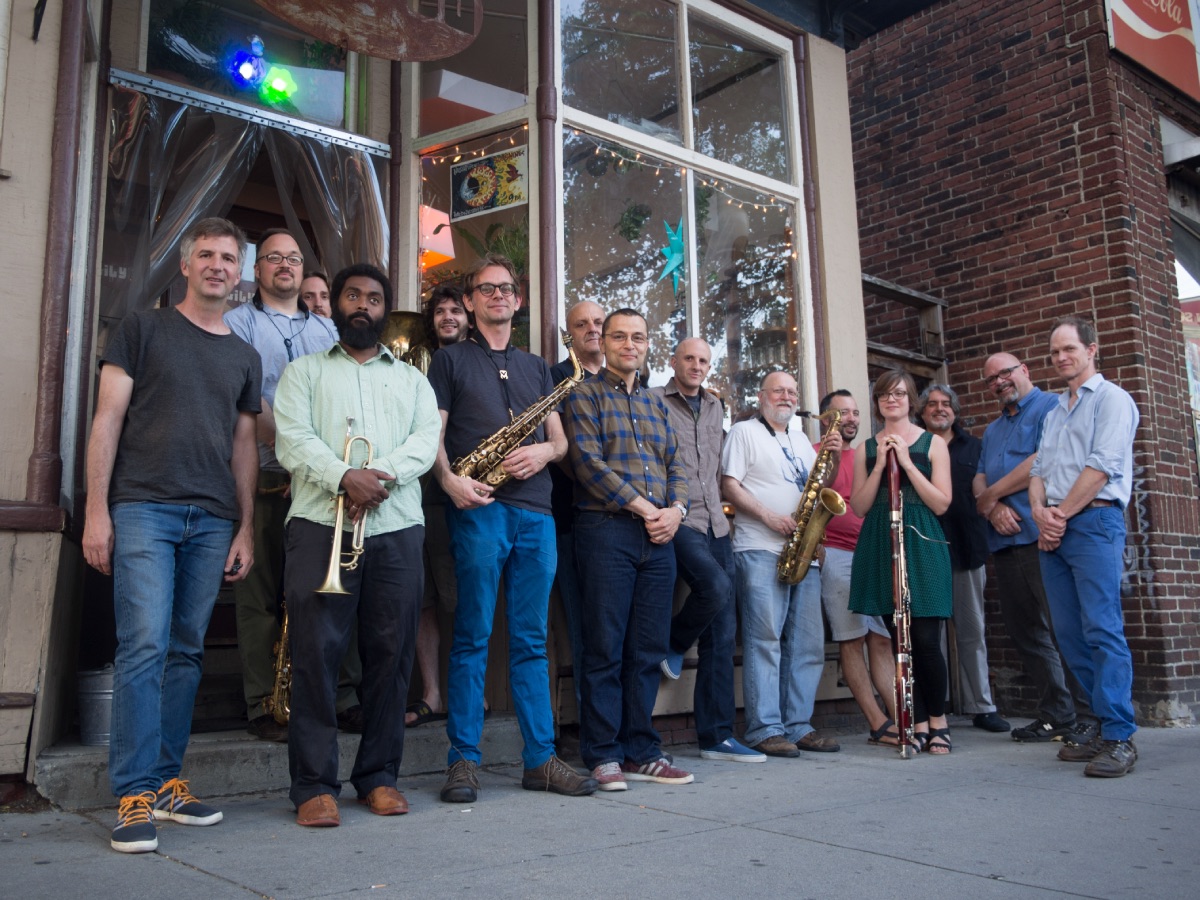 Cutout is a Boston-based quintet with deep and decades-long collaborative roots in groups such as The Whammies, Breakaway, Pandelis Karayorgis’ Pools Trio and the Bathysphere big band. The band has been playing monthly concerts at the Cambridge venue The LilyPad for many years, and all members are active in the international improvisation scene as well. Original compositions are interspersed by improvisations and “instant-arranging” techniques, inspired by free-jazz forms from North America and Europe.

The Porch Trio is an avant-garde jazz/improv group that started at the Quincy (MA) Porch Fest of 2016, and has since played many performances in the Boston area. The group draws from various traditions in free jazz and improvised music, and the use of analog electronics and a vintage electric bass gives the band a grungy, experimental rock and noise edge. The members are all veterans of the Boston avant-garde jazz community, combined with an extensive international performance experience rooted in the Chicago and Amsterdam improvisation scenes.

In 2021 the trio started the project PorchBone, with trombonists Jeb Bishop, Josh Roseman and Bill Lowe, with compositions by Jorrit Dijkstra. This project juxtaposes the abstract, improvised sounds of the Porch Trio against the velvety sound of a trombone section, inspired by the sound of the Duke Ellington big bands. The group plays a mixture of compositions by Jorrit Dijkstra, guided improvisations and free playing.

Boston-based quartet BOLT has been working locally since 2011, focusing solely on free improvisation. Using the distinctive timbral combination of two stringed instruments with the lyricon (an analog electronic wind synthesizer from the 1970s), saxophone, and percussion, BOLT’s group sound balances anywhere between the energy-orgies of free jazz and the sparse soundscapes of electronic minimalist improv. In the more expressive moments of a BOLT set the music hints at Boston’s influential master of microtonal improvisation Joe Maneri. In the more quiet introspective moments one could hear a modern day extension of the late 1940s experiments with free improvisation of the Tristano school. This recording was deliberately conceived to create a different listening experience from that of a live concert. The nineteen takes of this CD were carefully chosen from thirty-six improvised pieces recorded during a session in the summer of 2013. Shuffling the pieces in random order gives the listener a fresh perspective on the music every single time, adding an aleatoric and more compositional element to the music.

Matchbox is a Boston-based quartet with long and deep collaborative roots. The trio (without Jorrit) operated a decade ago under the name Mi3, with releases on Clean Feed and Hat Art. After Nate McBride’s move back to Boston from Chicago in 2012 the quartet formed and started developing a new, distinctive sound. The strong melodic, rhythmic, and structural elements presented in Karayorgis and Dijkstra’s tunes function like anchors, providing plenty of space for open improvisations and interaction.

Karayorgis’ “Shards” is about the physical gesture of a pianist’s fingers falling onto the keys, and his Ornette-inspired “Entanglement” is a juxtaposition of five phrases over a rolling rhythm section background. “Outward on Pleasant Spheres” is inspired by a poem by Sun Ra, and “Constellation” was named after the Chicago venue where the original version of the piece was performed with Chicago improvisers. Dijkstra’s intimate “Cluster Waltz” features a short open improvisation by the lyricon and bass, and his piece “Fourteen Squares” was originally written for four alto saxophones and a noisemaker, for his Reeds and Electronics project. The improvisers behave like a swarm of birds following each other. “Drooze” is switching between two contrasting moods, like being suddenly woken up from a nap. The two duet improvisations resemble this contrast as well.

In the spring of 2015 Karayorgis and Dijkstra put together a large ensemble of Boston musicians, to explore their writing for an extended group. Out-of-town guests Jeb Bishop, Tony Malaby, and Taylor Ho Bynum were added for this recording. The name Bathysphere comes from the deep-sea submersible in which scientists William Beebe and Otis Barton set diving records in 1934. The composers’ own explorations focus on the two analog synthesizers and the abundance of deep pitches in the group: two basses, two trombones, tuba, lyricon and baritone sax. The pieces were composed with the individual musicians in mind and their contributions during the rehearsal process were crucial. The CD cover is a print for the cover of National Geographic Magazine from 1934, inspired by unknown territories of the deep ocean.

Karayorgis’ “Sounding Line” and “Chip Log” take their names from nautical instruments. Each piece features different collective ensemble writing techniques -layered melodic lines and overlapping block sections, respectively- to create thick textures as backgrounds for open improvisations. Sounding line features blocks of improvisers, and solos by Pandelis Karayorgis, Jeb Bishop and Dan Rosenthal, and Chip Log is a feature for Charlie Kohlhase and Josiah Reibstein. Bathychord (Greek for “deep string”, or the double bass) is a long form piece featuring the basses, a trombone solo by Jeff Galindo and an alto solo by Jorrit Dijkstra. White Sea refers to the Turkish and Arabic name of the frothy Mediterranean. The journey takes us by two “island-themes” that appear fleetingly through a “fog” of 12-tone row based textures.

Dijkstra’s composition “Boter” (Dutch for butter) is a quirky homage to trombonist Quentin “Butter” Jackson, who was part of the deep end of Duke Ellington’s band. Tony Malaby is featured in this piece, like an updated Paul Gonzalves. In the introduction of “Funnel”, the ensemble goes through its full dynamic and instrumental range, funneling onto a unison middle C. The melody is enhanced by orchestrated snippets of the rest of the ensemble, and the improvisation resembles the dark, unknown abyss of the deep ocean. “Coelacanth” (a rare prehistoric deep sea fish) is a free blowing vehicle, with solos by Dijkstra, Seth Meicht, and Forbes Graham, culminating in a powerful drum solo by Luther Gray. 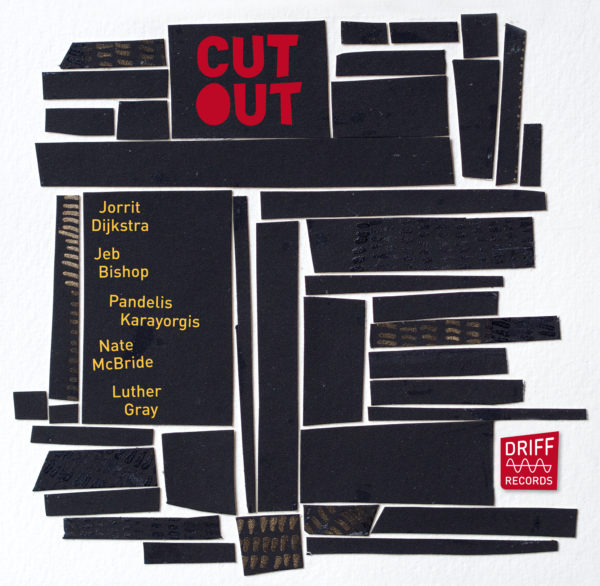 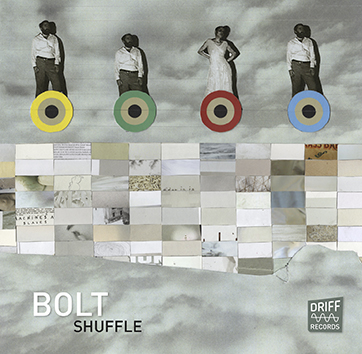 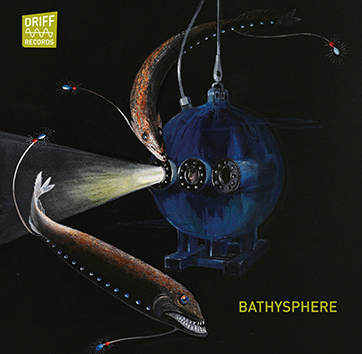 The Boston based saxophonist Jorrit Dijkstra and pianist Pandelis Karayorgis work together in various groups – including Matchbox and The Whammies – that take 20th century avant garde jazz as a starting point and apply further elements of chance and transformation. With the 15 piece ensemble Bathysphere they effectively imagine how The Arkestra might have sounded if, instead of travelling the spaceways, they had been concerned with undersea exploration (in a vessel captained by Sub Ra, perhaps). Key track “Funnel” evokes ethereal Ra ballads such as “Song Of The Sparer” and adds analogue synth squiggles and low piano-cluster depth charges. With two basses, two trombones, a tuba and a baritone sax on board, tracks like the slow, languid backstroke of “Boter” feel like they’re almost buckling under intense pressure. Eject carefully to avoid the bends. (Daniel Spicer, The Wire Magazine February 2016)

“This recording is not about avant-garde composition, by any means, but it walks with impressive balance along a fine line between experimentation and conservatism, respecting traditions of jazz arranging, while bringing in some new qualities of its own.” (Paul Serralheiro, Squid’s Ear)

“Bathysphere is a compelling project as each piece tenders a distinct story. They bridge the gap between old school applications and a futuristic mindset, awash with complex geometric narratives and affable melodic content.” (Glenn Astarita, All About Jazz)

“In the ten numbers featured on Matchbox we get an abundance of inspired avant jazz, some of the best around these days. There is an easy familiarity of the four that comes with a long period of interaction and so we get a chance to hear a seasoned foursome that can anticipate what everybody is doing and follow suit with their own corresponding conversational voice. This one is a definite treat to hear. Outstanding quartectonics!” (Grego Applegate Edwards, Gapplegate)

“This release is a very fine one, and more evidence that Driff is becoming a strong conduit for a terrific partnership of like-minded musicians.” (Troy Dosterd, Freejazzblog)

For many people, the term “free improvisation” probably conjures ferocious torrents of sound. The quartet Bolt takes a gentler path. The spontaneous collective improvisations of alto saxophonist and lyricon player Jorrit Dijkstra, guitarist Eric Hofbauer, cellist Junko Fujiwara, and drummer Eric Rosenthal invariably have a transparent texture that belies their open-ended method. And somehow, despite the lack of fixed meters, chord progressions, or tonality, the band is able to suggest a form for each piece: something post-serialist composers struggle to do with a lot of hard writing. Credit each player’s innate compositional sense, attentive ears, and quick reflexes. The mixture of jazz phrasing and seemingly random clicks, whirrs, squawks, pops, and plucks takes on a lyrical delicacy. (At times, Dijkstra and Hofbauer suggest Jimmy Giuffre with Jim Hall.) The CD presents 19 pieces in barely more than 47 minutes (the shortest at 37 seconds, the longest 8:09), most with rhyming (or slant-rhyming) one-syllable titles (“Lace,” Haze,” “Trace,” “Blaze”). As if to further randomize their approach, a note on the CD suggests that you play the CD in the mode of its title.  (Jon Garelick, The Boston Globe)