The Lyricon is an analog electronic wind synthesizer made in the 1970’s by Computone. I found mine in 1999 in a junk store, and had it repaired by the inventor, Bill Bernardi. These days I connect my Lyricon Driver to a Eurorack modular synth, and have integrated it in my bands and compositions.

I found my Lyricon I in 1999 in an antique store in Boston, but it was not functioning. I asked the inventor Bill Bernardi to repair it, and met him at his repair shop. He told me passionately the story of the invention and production. “I spent 5 years developing the instrument, I made 4 or 5 prototypes. I studied the acoustics of wind instruments, and made a synthesizer that works with additive synthesis to imitate the overtones. The transducer contains a membrane and a photo cell, which translate breath and attack into voltages. After the first Lyricon we got requests from players to simplify the synthesizer and add an extra oscillator, so they could play parallel intervals. So we developed the Lyricon II and the Wind Driver. The synthesizer in the Lyricon II is totally different and the Wind Driver has to be hooked up to an extern analog synthesizer. They were mass-produced by Selmer. My favorite is still the Lyricon I, because it has more control features and a better synthesizer.

Soon after the introduction various jazz and fusion musicians like Sonny Rollins, Roland Kirk, Wayne Shorter and Tom Scott started experimenting with it, not always with the most successful artistic results. Bernardi: “Roland Kirk spent 12 days with me to learn the instrument. He drove up from NY with some other musicians. I made 2 consoles onto one body and mounted braille onto the keys. Beautiful guy. Stan Getz wanted me to give him one for free, but I refused. I felt he had just to pay like everyone else…”

But there is also the sad story of how the factory had to close in 1980, because Yamaha started developing the WX7, a midi instrument, targeting to a bigger market. Bernardi: “Midi doesn’t work very well with a wind instrument, because it’s not precise enough.” For years Bernardi was dreaming of his come back: “When I retire, I’m going to make a Lyricon III, using all the new technology available. I already have a prototype” he said, showing an abstract wooden saxophone shape. “I had a friend who’s a sculptor design the body. It’ll be amazing to be able to include presets and more up-to-date features. None of that existed when I made the first Lyricons.”

The Lyricon is a beautifully made and fantastic sounding synthesizer (if in good shape!), with all the dynamics and accuracy of a saxophone or clarinet. It can produce fat and funky bass lines, whistling flute tones, dirty moog sounds and barely audible pitches with great dynamics. But it has to be treated with love and care, since not all the parts are still available, and for years Bill Bernardi was the only one who could repair it. “I tried at least a hundred different materials for the membrane of the transducer, to find the perfect one. It’s not rubber, it’s some sort of fiber. When you don’t play the Lyricon for a long time, the membrane gets hard and needs to be replaced. I have plenty of them, I stocked up for years on them. The photo cell is very hard to get too, they don’t make them anymore, I bought all of the ones I could still find.” Bernardi seemed happily surprised by the renewed attention for the Lyricon, which seems to come out of a retro seventies trend. “For years nobody was interested in the Lyricon but these days I get all the calls from Berklee kids who have a WX7 and an EWI, because Michael Brecker plays it. They’ve heard about the Lyricon and want to know what it is.”

In February 2014 Bill Bernardi passed away after a long battle with cancer, which made it hard for him to sustain a Lyricon repair business. But he left a treasure trove of schematics, manuals, notebooks and spare parts for the Lyricons in his basement. Electrical engineer David O’Brien is working with the Bernardi family and has started a repair business, to continue the repair work that Bill was not able to do, and to keep the Lyricon legacy alive. I have been using the Lyricon Wind Driver that I bought from Bill in 2004 (brand new, refurbished and optimized at the time) with a Cwejman S2 pre-patched analog synth. Wowa Cwejman was so kind to customize this rare instrument (only about 10 S2’s were built) for the Lyricon. But these days I use a Eurorack synth with modules by Cwejman, Make Noise, WMD/SSF, Doepfer, Audio Damage and Mutable Instruments. David O’Brien has custom made an interface for me that takes the Lyricon body’s plug directly. It works fantastic, and I have used it on most of my recordings in the last ten years. 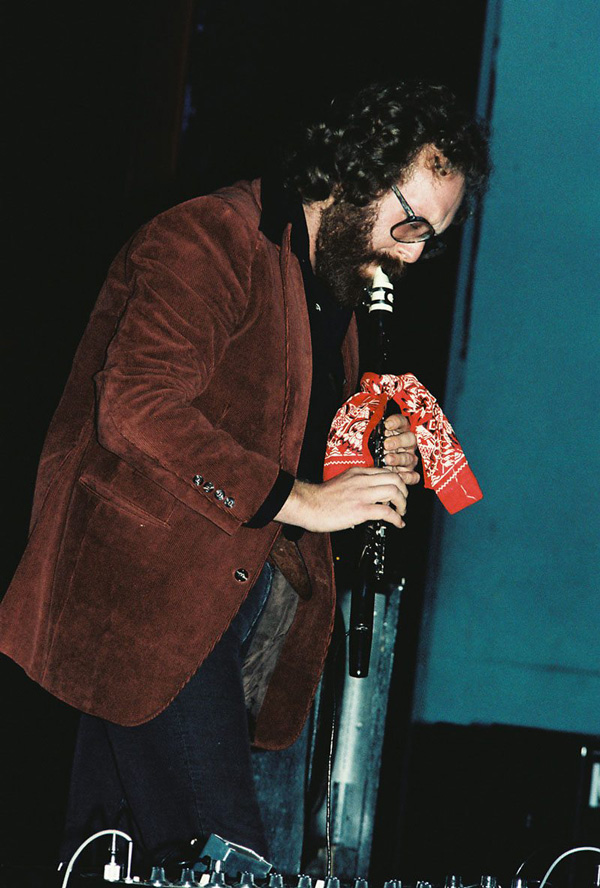 Rahsaan Roland Kirk with two Lyricon I consoles mounted to one body. 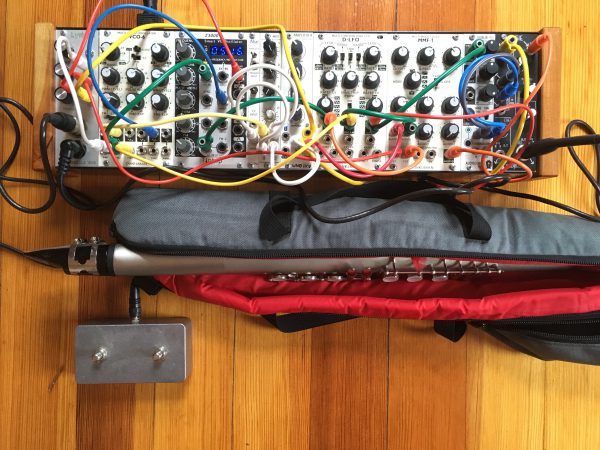 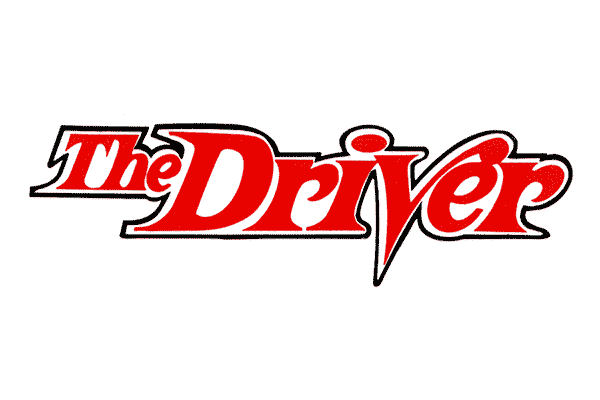 What is a Lyricon? The Lyricon is an analog electronic wind synthesizer invented in the early 1970’s by Bill Bernardi and Roger Noble of Computone Inc, in Massachussetts. Three models were built: The original Lyricon I (additive synthesis, one oscillator split into different overtones), the Lyricon Driver (to be connected to an external analog synthesizer through Control Voltages), and the Lyricon II (with two oscillators, filter and LFO). No MIDI functionality was added, because MIDI didn’t exist yet. Later MIDIfication modules were developed by JL Cooper and STEIM, but never worked very well. Of the Lyricon I, about 200 units were hand made, and about 2000 units of the Driver and the Lyricon II were manufactured by Selmer.

Why is the Lyricon such an expressive instrument? The Lyricon reacts to wind pressure (the harder you blow, the louder the sound), lip pressure (for pitch bend and vibrato) and of course to changes in pitch by fingering. The body is modeled after the fingerings of the saxophone, with a few clarinet-like keys, and two octave keys (additional octave up and down switches are available through a foot pedal). Some people call it the synthesizer that is closest to the human body, because of these three control parameters (most keyboards only have two), and because of the fact that it works with (continuous) control voltages, rather than MIDI. The MIDI protocol works in small steps (zeros and ones), resulting in less fluent controls for wind and lip.

How is it different from the EWI or WX7? Don’t confuse the Lyricon with either the EWI (made by Akai) or the Yamaha WX5 or WX7. These are MIDI-based electronic wind instruments, invented after the Lyricon, capable of doing very different things (such as sounding like a string orchestra or drum machine). The MIDI-based Yamaha WX7 was modeled after the design of the Lyricon, which is one of the reasons the Lyricon lost in the small market of wind synthesizers in the 1980’s.

Where can I buy a Lyricon? They are hard to find, but sometimes they show up on Ebay. The majority of them don’t work very well anymore, so beware!! A Lyricon in questionable shape (needs repair) can fetch up to $750, a working Lyricon I could go up to $2500, a working Lyricon II or Driver between $500 and $2000 or so. In many cases the owner does not know if the instrument is still working properly or not. If you have one for sale or are seriously looking for one, Ebay is the best place to go.

My Lyricon produces a constant sound, regardless if I blow into it, or turn the threshold knob. What’s wrong? Most Lyricons that haven’t been played for a few years, don’t function well anymore. The membrane in the transducer gets hard, and the Lyricon doesn’t respond to wind pressure anymore. The Lyricon will produce a constant sound, and upon blowing into it, the volume won’t change. This is bad news, the membrane needs to be replaced, a time consuming and tedious repair job. Especially the Lyricon I has fragile 1970’s style electronics inside, that can have a temperament…

Where can I get my Lyricon repaired? Up to a few years ago, the only person who could rally repair them was the inventor himself: Bill Bernardi. But unfortunately Bill passed away in February 2014. Lyricon player Jorrit Dijkstra and electronic technician David O’Brien are helping the Bernardi family to continue the Lyricon legacy, and to set up a small repair business. The Bernardi family has given David exclusive access to Bill’s archive of documentation and spare parts. Please contact David O’Brien (see link on right) if you want your Lyricon repaired. Please contact Jorrit Dijkstra for questions about the Lyricon history and for musical questions on how to use the Lyricon.

How can I hook up my Lyricon to the Eurorack system of modular synths? The Lyricon Wind Driver has outputs for Pitch, Wind and Lip control voltages, as well as a Gate signal, which can be plugged directly into Eurorack synth modules. David O’Brien has developed a Eurorack interface for the Lyricon II/Driver body, which eliminates the use of the Lyricon Wind Driver and Lyricon II case. Please contact him for more details on this module if you are interested.

More on Eurorack modules and the Lyricon: These days a wide range of small boutique analog synth companies are building a great collection of very interesting analog synth modules, that can be used in conjunction with the Lyricon. To get a very basic setup you only need one or two VCOs, a filter, a VCA module and an output module. Additional modules such as LFO, wave shaper, ring modulator can be added for more sound options. There is no need for an envelope generator, because the Wind signal is already a modulation source (envelope) that can shape the amplifier through an VCA module. The Lip signal can be used to shape the filter, the LFO rate, or various other modulation parameters. A great resource for modular synths is http://www.modulargrid.net 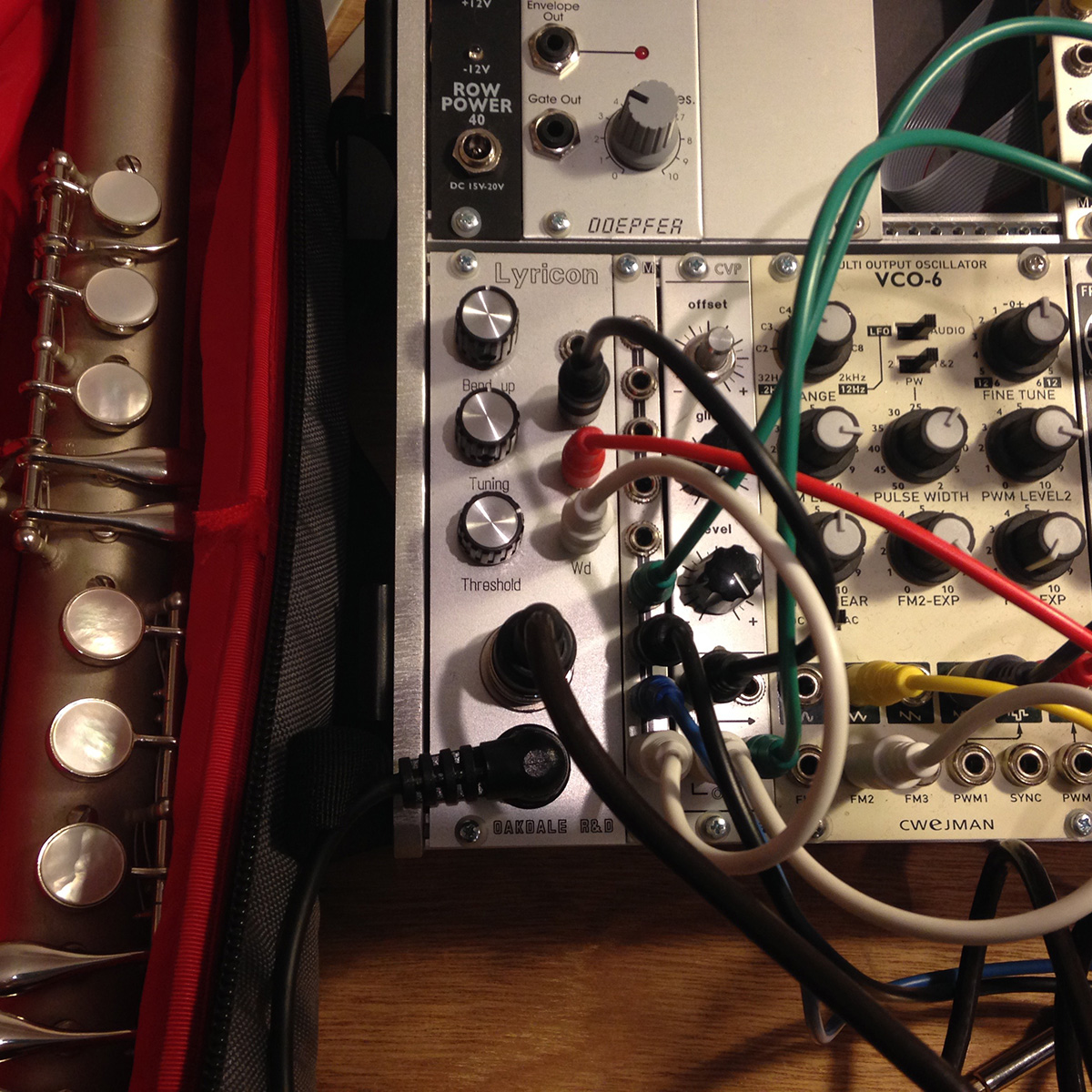