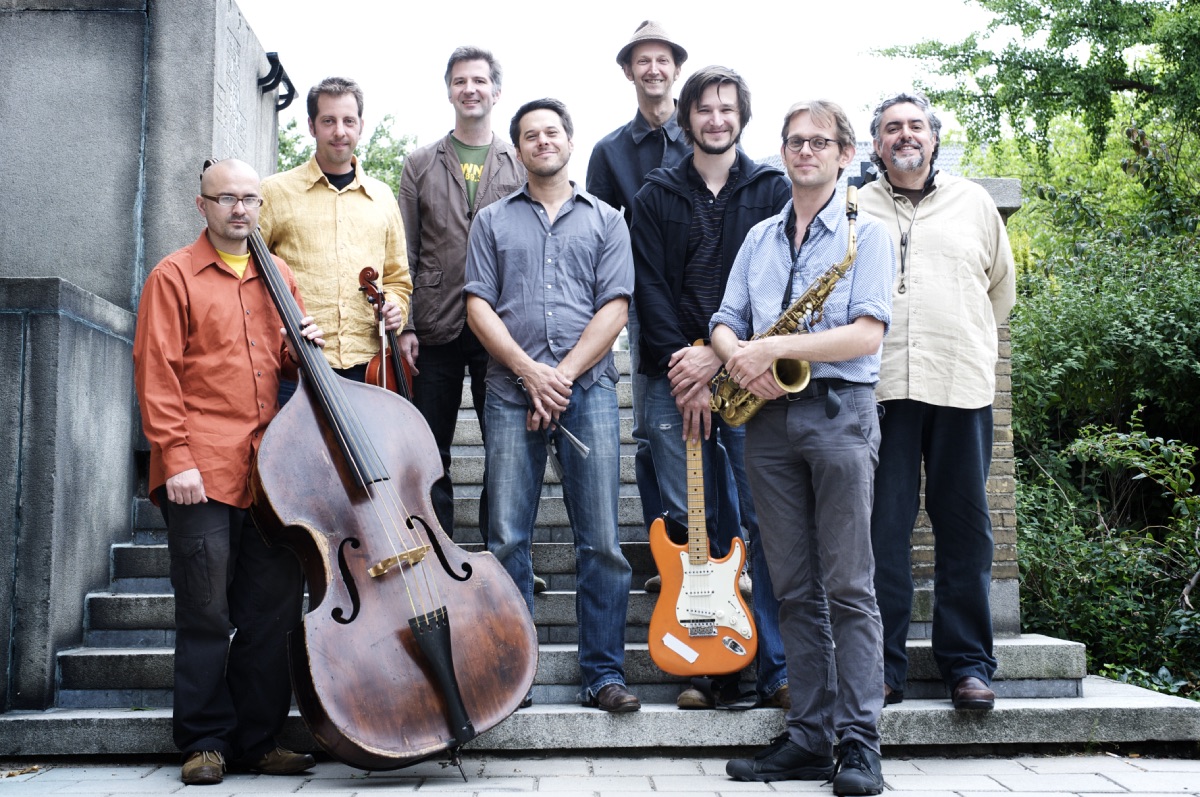 Pillow Circles is Dutch saxophonist and composer Jorrit Dijkstra’s eight-piece ensemble, originally formed for the annual composition commission at the North Sea Jazz Festival 2009. Bringing together improvisers from the Amsterdam, Chicago and New York contemporary jazz scenes, Pillow Circles brings a transatlantic approach towards composition and improvisation. With influences from indie-rock, early minimalism, big band swing and free improvisation, Jorrit’s compositions are exploring extremes in dynamic, texture, orchestration and tonality, without losing a strong sense of melody. By exploring the unique intrumentational possibilities to the maximum, Jorrit Dijkstra’s Pillow Circles can sound like an minimalist electronic improv group at one time, a hard swinging freejazz quintet at another, and a Sonic Youth inspired guitar band . This project was made possible through grants from the Netherland-America Foundation and Muziek Centrum Nederland. 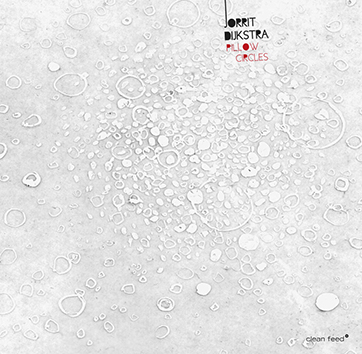 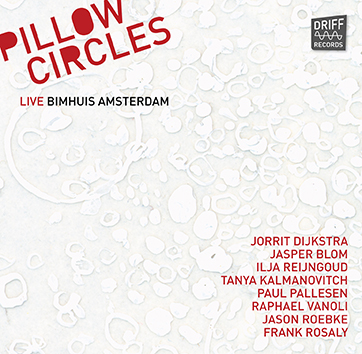 Clifford Allen, signal to noise #58, summer 2010 It’s appropriate that Dutch-born alto saxophonist Jorrit Dijkstra now calls Chicago home, for along with a fertile scene of young creative improvisers Chicago has also been host to a number of forward-thinking underground rock bands. Dijkstra has long been interested in boundary-crossing; his work with French pianist Benoit Delbecq doesn’t fall under any particular rubric, and in Vancouver he collaborated with jazz-cum-indie rockers Peggy Lee and Dylan van der Schyff in Talking Pictures. On Pillow Circles, Dijkstra’s second disc on Clean Feed, he’s joined by Chicago scene regulars Jeb Bishop, Frank Rosaly and Jason Roebke as well as New York saxophonist Tony Malaby, Dutch violist Oene van Geel and guitarists Paul Pallesen and Raphael Vanoli. “Pillow Circle 34” begins with a groove both flinty and round, guitars hanging in delicate opposition to one another as Rosaly and Roebke set a delicate bounce. The theme is densely voiced, the horns and viola piling up out of phase until tenor and trombone strike out in a dialogue of brass and steel wool. Dijkstra’s wide-interval leaps on the alto show affinities for John Tchicai, Roscoe Mitchell and Jemeel Moondoc, albeit slightly cooler. Bright Africanized guitar strokes contribute to the overall feeling of playful tug. “Pillow Circle 18” channels a bit of post-rock, wineglass harmonics and muted taps recalling the most delicate moments of the Dirty Three or the Pinetop Seven. As the ensemble spreads out into a psychedelic dustbowl, minimalist strum and rhythm washed suggest Slint and Tortoise, albeit with downy, expansive brass and woodwinds. The brief “Pillow Circle 55” begins in playful sputter and torqued quadrologue, the melody a gutbucket curlicue that would fit nicely in the Willem Breuker Kollektief pantheon (replete with a Waisvisz crackle-box). Pillow Circles cements Dijkstra’s place among modern genre-bending improvising composers.

Paul Serralheiro 9/29/2010 The title of this collection of compositions that serve as improvisation vehicles, with its connotations of lullabies and slumber, is the hardest thing to figure out in this octet session led by the Dutch alto-saxophonist Jorrit Dijkstra. Certainly the music is not a problem to understand and enjoy, as it slides down so smoothly, with its appealing melodic contours and robust arrangements and improvisation. The most distinct thing about Pillow Circles is its sinewy and octet instrumentation, with reeds, strings and percussion that blend superbly, from the opener, “Pillow Circle 34: for Henry Threadgill” whose theme recalls the twists and turns of George Russell’s “Ezzthetic,” a precursor that resonates as a mid-20th century prototype of the kind of music jazz has morphed into, whether the mainstream jazz radio and festival world has caught on or not. The same orchestration persists throughout in these “Pillow Circles,” each dedicated to a different musician. Reedists Dijkstar and Tony Malaby play a variety of instruments, with lyricon, analog synth and “crackle box” added to the leader’s alto sax, and Malaby switching gears between tenor and soprano sax. These two front-line voices are fortified very nicely by Jeb Bishop’s urbane trombone, and the pleasant entanglements of strings provided by Oene Van Geel’s viola, Paul Pallesen’s guitar and banjo, Raphael Vanoli’s guitar and Jason Roebke’s bass. This blend stands out in lines with lots of pluck and positive insistence, whether in the quiet moments in a piece like “Pillow Circle 18: for Fred Frith,” or many of the more momentous and dynamically active pieces of the nine cuts that make up this disc. Setting the mood or responding sensitively, percussionist Frank Rosaly is a versatile accompanist, able to deliver the steady but subtle rock feel of some of the passages, as well as the more aleatory, musique actuelle moments. As a composer, Dijkstra is someone who knows how to write for the people he hires to play his music, but he also seems to allow lots of room for the spontaneity of the meeting of musicians to happen. The improvising, buttressed by some solid pre-composed ideas, are a big part of what make this release worth the listen.

Jason Bivins, May 5, 2010 Pillow Circles features nine compositions from the leader’s “Pillow Circle” series, vividly recorded in Amsterdam by a vibrant group of Chicagoans and Europeans, and one New Yorker: Dijkstra (alto sax, lyricon, analog synth, crackle box), Tony Malaby (tenor and soprano), trombonist Jeb Bishop, violist Oene Van Geel, guitarist Raphael Vanoli, Paul Pallesen (guitar, banjo), Jason Roebke (bass, crackle box), and Frank Rosaly (drums, percussion, crackle box). They have an absolutely fantastic group sound, riotous, joyful, and tight as hell. Resourceful and imaginative, they bring to life Dijkstra’s ambitious, complex charts with tons of character and energy. Something about the taut rhythms and urgent chord changes on the opening “Pillow Circle 34″ recall Marty Ehrlich’s or Tom Varner’s writing: there are graceful unisons and counterpoint from the horns, some gruff funk (chank-chank guitars and all) and delicious breakdowns. It’s a rousing start, but from there the group moves onto the tiny squiggles and round-the-circle statements of “Pillow Circle 41,” which vividly recalls Braxton’s early Creative Orchestra pieces. One of the things I really love about Dijkstra’s approach to pieces like this is his ear for the deft arrangement or sub-grouping, musical details that completely enliven things: here, as the music verges on a groove, Bishop comes up with low weeping noises as Pallesen’s banjo fusses. Dijkstra gets deeper into the sound of the strings – both woody plucks and electric swells – on “Pillow Circle 18,” which after a fanfare comes to settle into a gently rippling country lament. “Pillow Circle 65″ has a lovely circuitous theme for high horns and guitars, with a more chugging riff for lower register instruments wending its way underneath, all clearing the way for a really gorgeous Malaby solo. There’s an interesting dedication to Robert Ashley on “Pillow Circle 88,” which is filled with percolations, repetitions, and beeping or crashing guitars. “Pillow Circle 10″ withdraws even more intensely into abstraction, with groans, creaks, and whooshes of air. As impressive as these pieces are, I found myself stirred by the gorgeous anthem “Pillow Circle 19″ and “Pillow Circle 23,” a dedication to Radiohead’s Johnny Greenwood, which is shot through with deep Mingus sensibilities. Top shelf!

Troy Collins, March 14, 2010 An international summit meeting, Pillow Circles joins four American jazz musicians with four Dutch improvisers. Similar in feel to his Flatlands Collective, this effort finds Dutch expatriate and multi-instrumentalist Jorrit Dijkstra paying homage to a handful of artists who have inspired him, with each piece dedicated to an individual. Bringing an empathetic familiarity to the octet are three members of the Chicago- based Flatlands Collective—the veteran rhythm section of bassist Jason Roebke and drummer Frank Rosaly, as well as trombonist Jeb Bishop, who are in turn joined by New York-based saxophonist Tony Malaby. The Dutch contingent includes violist Oene van Geel and guitarists Paul Pallesen and Raphael Vanoli. Together, the electro-acoustic unit explores Dijkstra’s wide-ranging suite with palpable enthusiasm, shifting from hypnotic minimalism and cinematic post-rock to aleatoric abstraction and pithy free jazz.   Originally commissioned for the 2009 North Sea Jazz Festival, the album-length suite reveals a multifaceted blend of dynamics and moods, inspired by past and present traditions. Pallesen’s folksy banjo lends a touch of surreal Americana to “Pillow Circle 41 (for Benoit Delbecq),” while Dijkstra’s analog synth conjures experimental futurism on “Pillow Circle 88 (for Robert Ashley).” The three horn front-line of Dijkstra, Malaby, and Bishop is formidable, ranging through intricate counterpoint, raucous collective blowing, and serene unison harmonies with ease, sometimes all in the same tune. The string section unveils a kaleidoscopic array of textures, from Geel’s sinewy double stops to the guitarists’ prismatic fretwork, which veers from impressionistic finger-picking on the lyrical “Pillow Circle 18 (for Fred Frith),” to the scorching feedback that concludes “Pillow Circle 88 (for Robert Ashley).” Roebke and Rosaly’s longstanding rapport carries them through endless shifts in tempo and rhythm, keeping the octet focused through a variety of approaches. An expansive, episodic suite, Pillow Circles pays homage to everyone from AACM stalwarts Henry Threadgill and George Lewis to modernists like Fred Frith and Jonny Greenwood (of Radiohead fame). Endlessly captivating, these splendidly executed multi-layered compositions reveal new facets with each listen, criss-crossing genres as easily as international boundary lines.

Fort Worth, USA, February 10, 2010 Speaking of large ensembles and Europeans, on Pillow Circles, commissioned for the 2009 North Sea Jazz Festival, Dutch saxophonist Jorrit Dijkstra (based in the U.S. since 2002) leads an all-star octet that includes saxman Tony Malaby, trombonist Jeb Bishop, bassist Jason Roebke, and drummer Frank Rosaly. Imagine if you will an ebulliently percolating jazz that’s expansive enough to accommodate rustic touches like guitarist Paul Pallesen’s banjo, moments of spacious experimentalism and even a soupcon of indie depresso-rock (dig the segment dedicated to Fred Frith). This is visceral music with intellect and a fair amount of humor. What’s not to like? (And by the way, how’s your Dutch?)

Pachi Tapiz, Pamplona, Spain (translated from Spanish, by Google Translate) Tributes essentially without loss of identity. From classic jazz, contemporary composers, pop groups and avant-garde musicians. These are some of the composers Jorrit Dijkstra honored in “Pillow Circles.” Composed at the request of the North Sea Jazz Festival and the Muziek Centrum Nederland, “Pillow Circles” premiered at the Dutch festival’s 2009 edition. Dijkstra’s music moves through the fields of contemporary jazz that do not look back too much, that is to open to inspirations outside of jazz, and in which the compositions (magnificently inspired by the work of the honorees) are as important as the solos. Throughout the disc, one is not so surprised by the contributions of Tony Malaby and Jeb Bishop, who are in a wonderful moment. You cannot say the same thing (about the lack of surprise, not about the quality) of Oene van Geel on the viola.  Not a very common instrument in jazz, and he has a great sound. Listening to works like this raises several questions. First of all, why is creation under the auspice of festivals not more common in our country?  Second, why is it so difficult to find musicians in our country who dare to draw from varied traditions like Jorrit Dijkstra does?  And finally, is it possible that our national discography might have some kind of hole like this?